"Who, you?"
You may ask this if you know me well. I'm not the first to jump at the opportunity to hold a new baby. I give dirty looks to children that kick the back of my seat on planes. I might have laughed when I saw a kid bite it on a segway. I fill my days and nights with me-time and there's never a moment for boredom. But as much as I'm enjoying life, I've been given a new vision for the next chapter.

I've started the process of adopting from China. I don't know who the child is yet, but I think it will be a girl around five years old. It's a long process, and there are a lot of doors that need to be opened for it to work out. So I'm just taking it one step at a time and seeing if God continues to open those doors for me.

The time I've spent with orphans in China and Uganda has softened my heart and put in it a desire to be someone who can change things for at least one of those children. I think this verse points to what I've experienced and how I feel. And I only want this to happen in God's timing, so I'm just trying to make myself available, and seeing what he does.

"Once our eyes are opened we cannot pretend we do not know what to do. God, who weighs our hearts and keeps our souls knows we know and holds us responsible to act." Proverbs 24:12

So, I will be blogging about any major updates regarding all this. And probably sending out emails when I have fund raisers, as adopting if freaking expensive. But it's been exciting to see how God has provided so far. I may have Lailu pick up a part time job cleaning houses.

I wanted to use this post to answer some questions and concerns that might come to people's minds. I know I've still got questions of my own, but I've been researching and learning a lot in preparation for what is coming. Among the more serious questions: How long will it take for her to notice the lack of variety in the meals I "cook"? How young is too young to take to a concert? (With ear plugs of course, safety first) If I can fit her on my lap somehow, can she fly for free?

Why Now?
Things have changed in the last three years of my life. It started with a trip to China "for" my sister Rose and the orphan ministry she is involved with, and I believe my future was sealed when I began to love a little girl there. Having her in my life and taking care of her was fun. Hard and fun, who knew. We've been close ever since, and I can't wait till Ruby comes home to her new family in Texas. They've adopted ME too as Aunt Sarah, so she's stuck with me.

Since meeting her I've wondered when in my life would be the best time to start this process. I'd mostly assumed it'd be when I was married. But about 6 months ago I was prompted to start praying about it more seriously, and came to the conclusion that it's actually now.

Wouldn't the child be better off with two parents?
Yes :) I do think so. But there are 147 million orphans in the world. If that many couples would come forward to adopt, that would take care of things. But they don't. So while waiting for the ideal family, a child grows up with no parents at all. Usually without much attention at all from the orphanage workers who are overwhelmed by the number of children they are responsible for. Sometimes one nanny to 18 babies.

So, I know one person to count on is better than none.

Why International?
Some people wonder why I would adopt internationally, instead of helping the children of our own country who are in need of a family.
First, my international experiences in China and Uganda are what has opened my eyes to the orphan epidemic, so those kids have a special place in my heart. Every child needs a family, from the United States to China. But seeing and knowing the living conditions of orphans outside the US, I am particularly drawn to that need. Basic needs such as food, heat and human contact are not met in the lives of many international orphans. Ideally they would be raised by a family in their own country to fully know their culture. But the reality of it is they aren't being offered that.

This is my friend Annie’s daughter, Lizzie, before she was adopted from China. The nurseries in China are packed with metal cribs. And they are silent, because babies who don’t get picked up learn there is no point in crying. 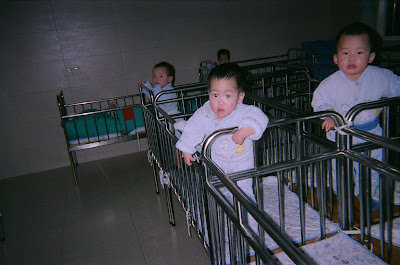 Annie says "It was a 'good' orphanage by China standards. It was clean and it was well run, but it was cold and sterile and there was one nanny to every 18 babies. I do think they cared about the children but how does one person love and nurture 18 babies? The answer is - you don't. You provide for their basic needs - and - that - is - it."

Amazingly enough, in some countries society sees both orphans and the handicapped as less valuable people. Either of these labels will bring with them a difficult life, as a child and on into adulthood. Finding a job and living a successful life are unlikely.

Bad living conditions go far beyond that in many circumstances. These are not rare occurrences, I've read about it time and time again from various countries.
This woman has adopted from Eastern Europe. She has seen what happens particularly to special needs children who are more easily shelved away like books until they die young. These photos show why she finds international adoption an urgent matter. I'll warn you they won't give you a warm fuzzy feeling. But this is reality for many kids.

In Conclusion
Well I don't have a conclusion but wanted to thank my friends and family for their prayers and support in this journey. I'm really excited to see it unfold.