Today is over, and we ended up not having to sleep over at the hospital, so all of us are happy about that! 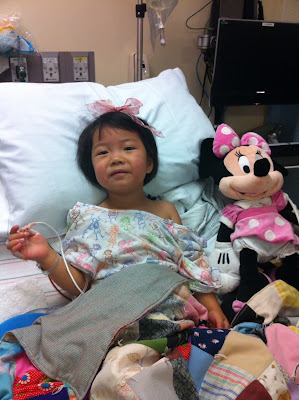 The good news gathered from today's procedure is that the blood pressure in her lungs is not too high to move forward with surgeries.  If she'd had Pulmonary Hypertension, that would have presented a lot more barriers that could keep us from getting to a good place for her to be able to handle surgery.  So I'm thanking God for that answered prayer.

The doctors still don't think that it will be possible to make her left ventricle usable.  So that means they'll probably want to move forward with their initial plan of doing a Bi-directional Glen and Fontan surgery(ies).  The diagnosis they're giving to her condition for now is Double Outlet Right Ventricle with Mitral Atresia, which from what I understand could also be called Hypo Plastic Left Heart Syndrome.

Ideally I would love to find a hospital that believes she's a candidate for a bi-ventricle repair, because staying single ventricle would not make for a long lifespan for her heart.  The doctors at Rady's don't think that could be done.  But I'm hoping for the best with second opinions, which I'll be moving forward to gather asap, as the doctors at Rady's would like to operate in the next couple weeks or months.