It feels really great to be home and sitting on the couch with my computer, as Naya is tucked in bed sleeping.  It's our 3rd night home, after 5 months of hospital living.  Naya is happy. 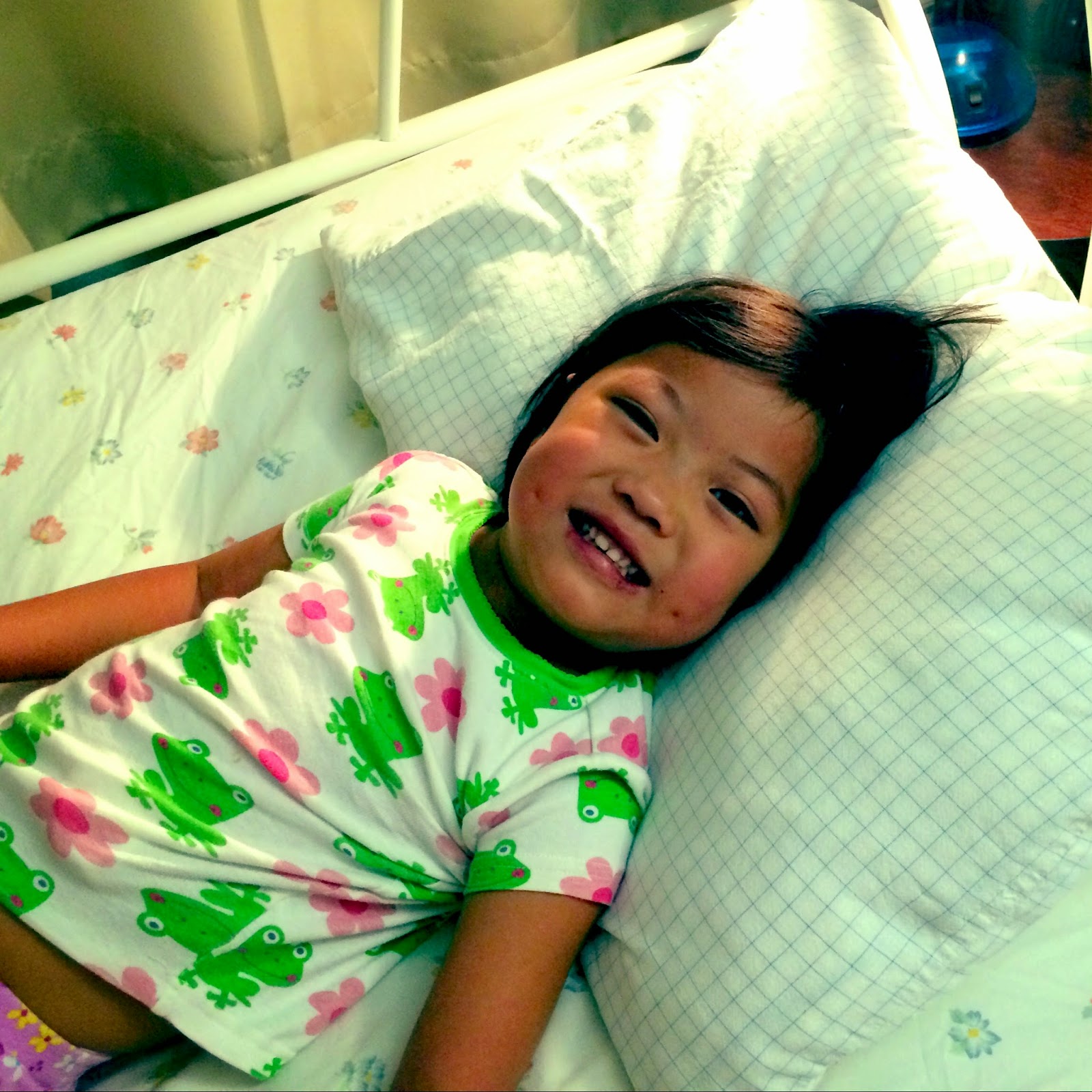 We're hitting the ground running with all the unpacking, re-organizing for new needs, and zillion follow up appointments Naya has for PT, OT, ST, Pediatrician, Cardiology, School Evaluation, and on & on.  She'll be back to Kindergarten on August 13th!  Navigating each day with the new physical challenges she faces has been harder, but we're figuring it it out.  And I know her recovery is no where near complete, thank you Lord.

I realized I hadn't posted any type of summary of what she's been through these past five months, so wanted to do that now for anyone who was wondering what the details have been.

Naya & I became family on January 21st, 2013.  I knew she had congenital heart disease when I adopted her.  However what I found out at her first cardiology appointment once I got her home was very much a shock.  Instead of the quick fix I'd been told would get her to healthy, it turns out her condition is much more serious, with no current long term 'fix.'  Her diagnosis is hypoplastic left ventricle, mitral atresia with double outlet right ventricle, and multiple ventricular septal defects.  Basically she has one ventricle instead of two, pumping blood to her body and lungs.  There are a serious of surgeries that children with this condition usually get.  I learned she could get these in the near future, they would hopefully keep her heart working for a decade or two, and then we hope that there have been advances in medical science to create an option for her other than a heart transplant.

After being home a year, on February 24th 2013 Naya went in for a Fontan surgery.  This surgery would result in the final outcome that 2 or 3 surgeries normally result in.  While it would be a more difficult recovery, the idea of one versus two open heart surgeries made sense.

The first couple days were very rough, but her little body pulled through and started to recover.  After this first week of watching her struggle and go through torture, I know why people call these children Heart Warriors.  She is so strong.

Several complications occurred over the next couple weeks, including another open heart surgery, and an abdominal bleed where she lost 80-90% of her blood.  Her body couldn't recover from the surgery with the mounting setbacks.  She was put on ECMO, a life support device which the thought of makes a parent shudder.  That was the hardest day of my life, knowing how close she was to death.  She went in for a third open heart surgery and the Fontan was reversed, leaving her with a BT Shunt, which was essentially the original functionality she began with.  Thank the Lord, she was able to be taken off ECMO, and over the next couple weeks began to improve.  At this point she had been unconscious for around a month.  Over the next couple days the doctors started to fear that she may have suffered brain damage during one of the dangerous points where she'd been deprived oxygen. As we waited for her to come out of sedation, hoping for response, it didn't come.  A CT scan revealed severe brain damage with a "poor" prognosis. Hypoxic-ischemic brain injury.  This was terrifying and heart breaking for me, imagining that I had lost Naya as we all knew her, even though her body remained here.  My family & friends got me through that time with their hope and faith that God was going to restore her.

After a three day treatment and induced 'brain coma', the sedation was turned off and we waited. Waiting to see if she was going to open her eyes, see us, breathe on her own, or be able to squeeze our fingers.  That kind of waiting makes you want to put yourself in a coma and not wake up until you have answers.
She DID breathe on her own, as the breathing tube was removed. Thank you God.  She opened her eyes. She didn't respond to our requests, and only looked through us. The next several weeks were like walking around with a knife in your heart. Seeing her in this state was unbearable at times. We kept reminding ourselves to 'Walk by Faith, and not by Sight.'  And 'sight' did not feel good.  The first time she smiled is when my hope returned. We were joking with a nurse, calling my mother 'Nana banana', and a slight smile crept across her face. She was listening to us...and understood a joke. She was still here.  Once Naya stabilized heart-wise we were able to leave the Cardiac ICU.  Our next 3 months were spent in the hospital's Rehab unit.  When we entered, Naya couldn't hold her head up, talk, or move her body parts much at all.  Medical staff have told us she is a miracle; seeing where she started to where she has come.  She continues to improve daily.  She can now sit up, eat with her fork, talk talk talk, and is her old self.  Praise God, our faith finally became sight.  She still has a long road of recovery ahead of her, but I am so grateful that she continues to improve.

We finally left the hospital July 26th and went straight to Seattle where Naya strolled down the aisle as my dear friend Ryan's flower girl. She is a true miracle that I am so thankful for. 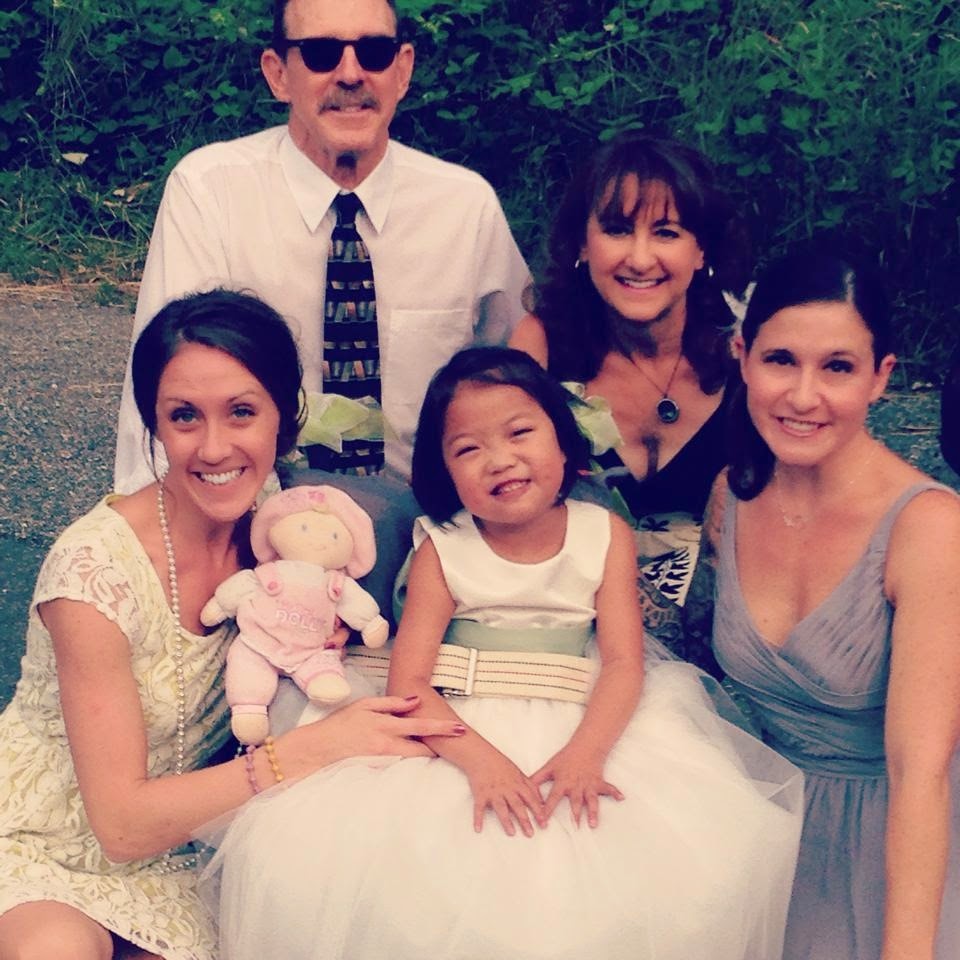